Did You Feel It? | Crowdsourcing Earthquake Maps

A Did You Feel It? map for the magnitude 5.7 offshore northern California earthquake on January 28, 2015.

Not so long ago, the first thing that most people did after feeling an earthquake was to turn on their radio for information. That practice is changing. After the 2003 San Simeon earthquake in central California, many peopled logged on to the Internet to get information and to share their own experiences.

Minutes after people entered their earthquake data into a webpage called Did You Feel It?, a map began taking shape on the Internet. Within hours, based on more than 14,000 inputs, a Did You Feel It? map showed where and how strongly people had felt the earthquake and where damage had possibly occurred based on reports from citizens.

Since 1931, the U.S. Geological Survey has assigned shaking intensities to earthquakes in the United States. Until recently, the USGS collected most of the observations used to assign intensities through questionnaires mailed to post offices in the earthquake region. The process of mailing questionnaires, waiting for responses, manually interpreting the responses and preparing intensity maps could take months.

In 1997, the USGS began using the Web to collect data and publish maps on the Did You Feel It? website. The USGS coordinates a network of more than 7,000 sensors and 100 stations to detect and report earthquakes. In earthquake-prone areas, the network is dense enough to provide data for rapid and accurate earthquake detection. In other areas, however, it might take the USGS up to 20 minutes to detect an earthquake and issue a public alert. The Did You Feel It? data supplement the instrumental data, especially in areas without many instruments. 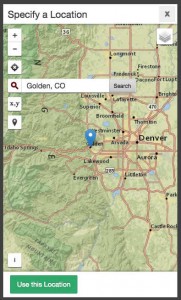 A screen capture of the mobile version of the Did You Feel It? location map.

Did You Feel It? asks volunteers who feel earthquakes to fill out a brief online form giving their location and their experience of the shaking and effects. The project converts information from thousands of volunteers into a Did You Feel It? map, a real-time online map that lets the public and emergency responders better understand the effects of an earthquake.

Using data from Did You Feel It?, the USGS computes the intensity values for the various reported locations of earthquake effects. The agency averages volunteer responses and posts a Did You Feel It? map, periodically updating it with additional data. The map is color-coded according to an intensity scale of from 1 to 10.

Even though volunteers on Did You Feel It? are encouraged to send in “not felt” responses, those who felt the earthquake are far more likely to log on to the site and complete the questionnaire than those who did not. The system also has to handle user errors and malicious incorrect data. Moreover, the webserver and back-end processor have to be able to handle many simultaneous sessions after a sizable earthquake.

A screen capture of the mobile version of the Did You Feel It? questionnaire.

Through Did You Feel It?, the USGS has received more than 2.8 million responses since it began soliciting data in 1997. By supplementing conventional USGS sensor networks, the data provide comprehensive earthquake coverage across the United States.

Compared to conventional networks, volunteer reports yield a more complete description of personal experiences, the effects of an earthquake and the extent of damage. The quantity and quality of the data is superior to the old method of using paper questionnaires, and the real-time nature of the data permits more rapid emergency response, especially in areas where there are few or no seismic instruments.

In addition, volunteers can personally benefit by learning how other communities fared during an earthquake and gaining a greater understanding of earthquake effects. Did You Feel It? might also allow people to better cope with the emotional impact of an earthquake by sharing their experiences.

The Did You Feel It? case study illustrates the following steps in the Federal Citizen Science and Crowdsourcing Toolkit: