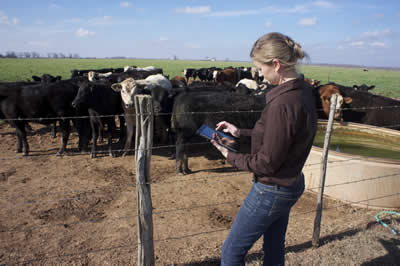 Dr. Lindsey Holmstrom, an epidemiologist with the FAZD Center, demonstrates how data is entered directly from the field using an AgConnect app on an iPad. Photo credit: U.S. Department of Homeland Security.

Swine flu … avian flu … everyone knows of diseases that can infect both animals and people. Nearly three-quarters of newly described diseases in people are estimated to have originated in animals. These and other animal diseases foreign to the United States can have serious consequences for animal health — and possibly for human health — if introduced into animal hosts.

It might be impossible to protect ourselves and our animals from every disease, but researchers are working to build our defenses through early awareness, partly with the help of new crowdsourcing technology adopted by animal health caretakers. Scientists at Texas A&M University created a surveillance tool that veterinarians with mobile devices can use to record animal health observations. The tool is called the Enhanced Passive Surveillance system.

The Institute for Infectious Animal Diseases is part of Texas A&M University’s AgriLife Research and also a U.S. Department of Homeland Security Science and Technology Directorate Center of Excellence. The center works with international, federal and state partners to develop products focused on high-consequence animal diseases.

In 2013, the center received federal funding to develop a disease-surveillance technology designed to protect farm animals from potentially catastrophic outbreaks of infectious diseases. The EPS system captures field information from veterinarians about livestock and poultry health. The system then organizes the information into an easy-to-use computer display for monitoring and analysis, combining it with other data coming from livestock markets, wildlife testing and veterinary diagnostic laboratories.

A single sick cow often triggers no alarm. Individual ranchers, veterinarians and officials might be unaware that multiple animals from herds in the same general area are getting sick. By organizing individually reported information about animal health on a state and regional level, the EPS system can help veterinarians identify emerging trends. Early detection of infectious disease allows veterinarians, emergency managers and state animal health officials to quickly respond.

Getting the right data standards and data-sharing agreements to ensure producer support took longer than initially expected. Project organizers took time to collaborate with potential participants in order to fine-tune smartphone and tablet applications to encourage participation and near-immediate transfer of data for analysis.

Many animal farms are located in remote areas where electronic transmission of data is not possible. In response, the project built data collection systems that can store information until the EPS device comes within range of cellular or Wi-Fi connections.

The goal of the program is to roll out the new surveillance system to all major animal industries. In addition, the system will collect data about wildlife from veterinarians, wildlife biologists and others. In 2014, the system expanded from the original experimental area in Texas to 15 states. Seeing concrete results within a short amount of time has motivated people to adopt the new technology.

The beauty of the system is that it captures information about more than just foreign animal diseases. It allows officials to detect and respond to outbreaks of all kinds of infectious diseases, helping them protect the livestock and poultry industries. The developers are devising new apps on mobile platforms customized to serve specific industries.