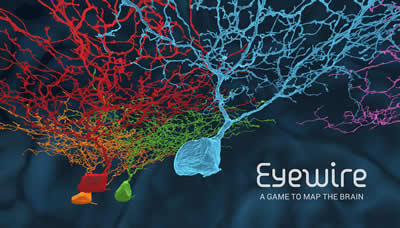 EyeWire: a game to map the brain. Credit: Seung Lab.

The human brain has roughly 80 billion neurons connected with millions of miles of axons and dendrites. So it’s no surprise that neuroscientists are only just starting to understand how the brain is wired.

Neurons are miniscule, so researchers are utilizing a new imaging technique to map their connectivity. Even so, it takes a neuroscientist tens of hours to reconstruct a single cell.

To accelerate the pace of neuroscience, Seung Lab, formerly at the Massachusetts Institute of Technology and now at Princeton University, created EyeWire to crowdsource data analysis of brain neurons using an online game. EyeWire utilizes something more intelligent than even the most powerful supercomputer — the human brain. People can still do many things better than computers, including recognizing patterns. Capitalizing on this ability, an interdisciplinary team of scientists, developers and designers are turning EyeWire into a gaming platform to map the brain.

Launched in 2012, EyeWire is a game that uses crowdsourcing to help map the brain. Anyone can play and players need no scientific background. They need only be curious and enjoy solving puzzles.

The game is based on mapping the retina — a part of the eye, but also part of the central nervous system. The retina plays a role in motion processing.

The goal of the game is to map neurons, allowing researchers to identify new synapses and cell types. Players map branches of a neuron from one side of a cube to the other. They scroll through the cube and reconstruct neurons in segments with the help of an artificial intelligence (AI) algorithm, making connections that the AI missed. Multiple players map each cube; then their work is compared.

The first challenge was establishing and growing a community. EyeWire didn’t magically grow into a vibrant community of hundreds of thousands of people. It was meticulously built. Prior to launching, project developers created social channels (Facebook, Twitter, Google+ and a blog) and seeded them with great content about the project and neuroscience in general. On Facebook, they focused on sharing funny and beautiful science images. They personally reached out to journalists, introducing the project and asking them to write articles when they launched the project in December 2012.

The EyeWire team initially assumed that if you build an amazing project, people will flock to it and participate. The reality is that you must work to help people find you! You have to reach out to journalists, be present on social media and remember not to take your project too seriously. People on the Web will share things they find cool, funny and interesting.

The second challenge relates to growth. About a month after launch, EyeWire saw a sharp decline in registration and participation. The project responded by launching competitions, allowing players to join teams and compete. This doubled participation and laid the foundation for today’s more robust challenge infrastructure.

Again, project staff assumed that new users would spread the news about the project after it’s launched, recruiting their friends in an exponential growth curve. The reality is that getting your project out there is not enough — you must also consider how to keep people engaged even after they register.

The third challenge was providing a technical solution for participation. Although EyeWire’s team competition infrastructure is now robust, the first competitions had no back-end infrastructure. Project staff manually queried the database for leaders and pasted results periodically into publicly accessible Google Docs.

Project staff assumed that it was better to wait until a feature was perfect before putting it out there. In reality, if your users want a feature, it’s best to get it to them as soon as possible with a “Minimum Viable Product.” If you don’t have the resources to fully develop a feature but there is sufficient demand, hack your way to make it happen! 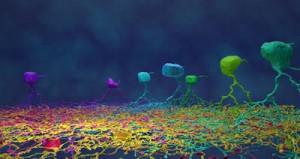 The fourth challenge was managing the volunteer community. The project developers think of EyeWire’s community of more than 200,000 gamers as an extension of their lab. A team of game masters manages community relations, which include informing the community of changes in game infrastructure (such as features and updates); training new top-level players; answering dozens of emails per week; handling dozens of requests daily through in-game chat; writing blog posts; announcing cell completions; administering competitions; and awarding competition swag. Most of our game masters are not neuroscientists but rather have creative backgrounds in fields such as script writing and animation.

Large-scale community management is too much work for one person. Global online communities are online all the time. EyeWire’s top players spend 50 hours or more per week in the game. Having a pair or a team of community managers working closely with the elite among your citizen scientists is the best way to supervise and grow your community.

The fifth challenge was empowering volunteers to play a game about neuroscience. EyeWire may have been developed at a computational neuroscience lab at MIT, but the average user has no formal neuroscience background, so the science is presented in a layman-friendly way. In addition to writing general blog posts, featuring interesting Quora answers about the brain, and sharing cool YouTube videos, EyeWire created a graphic design internship with Massachusetts College of Art. Since the project’s first interns in 2013, nine students have created designs, animations, videos and still images, dramatically improving the user experience and user interface of EyeWire. The aesthetic appeal, media images and design awards are partly a result of this partnership with interns.

Again, the project staff assumed that beautiful images could be made in house. The reality is that designers do it better, but they’re expensive. Creating a student internship is an effective alternative. As an added benefit, a young designer gains experience working in science.

Ensuring both accuracy and efficiency of your citizen science project is a central concern. When EyeWire first launched, anywhere from 10 to 18 people did each cube. Now, no more than five people do each cube, thanks to algorithmic improvements in assessing the accuracy of players in real time and assigning cubes accordingly. Give thought to making sure that your data quality is high, whether you are collecting or analyzing — a citizen science project with algorithms that cut in half the number of people who do each task will do twice as much science with the same number of users.

Add mechanisms that allow you to detect and eliminate nefarious uses of your system. Many teachers use EyeWire in the classroom; however, they rarely monitor their students in chat. When a classroom joins EyeWire, chat is usually badly trolled. Once, a class of 8th graders on the island of Maui spent hours per day for well over two weeks creating new accounts so they could curse and say inappropriate things. We now have ban features to prevent such abusive behavior.

Empower your players by creating special statuses. In EyeWire, for example, players can unlock special chat colors and badges for roles such as Mentor and Moderator. Their advanced roles come with powers to mute others, IP-ban in extreme cases, and even jump into another player’s cube to help. These special roles double as enhanced game dynamics, switching up the task and preventing potential monotony. It is extremely important to provide ways for players to advance or level up within your project.

EyeWire has become a huge hit. More than 200,000 people in 150 countries around the world have played the game. The results will help scientists understand how the retina processes visual information. They will also help engineers improve the underlying computational technology, potentially making it powerful enough to some day detect “miswirings” of the brain that underlie disorders like autism and schizophrenia.

The EyeWire case study illustrates the following steps in the Federal Citizen Science and Crowdsourcing Toolkit: