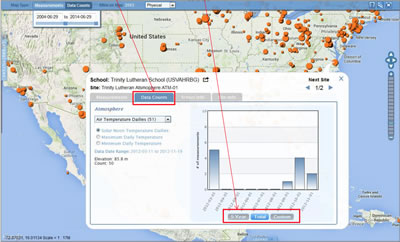 Clouds are beautiful and familiar sights, but closer observation can yield many surprises due to their constantly changing forms. Clouds are of abiding interest to scientists from the National Aeronautics and Space Administration because they are so important in shaping the Earth’s climate.

Citizens have long contributed to scientific studies of clouds. Since 1994, the Global Learning and Observations to Benefit the Environment Program has been engaging students around the world in observing and reporting about clouds. Since 1997, NASA’s Students’ Cloud Observations Online (or S’COOL) Project has used cloud observations by students from every continent to verify findings by a NASA cloud-observing satellite.

These two projects are now joining forces in a GLOBE/S’COOL partnership to sponsor cloud observation campaigns by citizen scientists.

Participants in the projects observe clouds as a NASA satellite passes overhead, using a one-page form to record their observations. Then they report that data to NASA or GLOBE through a Web form. Participants can make and report observations at any time, whenever schedules permit.

Observations reported to S’COOL are matched with satellite data, where applicable, within about a week.  Observers then receive a return email inviting them to analyze the comparison between the two points of view.

Both the GLOBE and S’COOL websites include information about the project, about clouds, and about the importance of understanding this highly variable aspect of the Earth system. Plans are in development to merge the two projects during fiscal year 2016 to create a single resource for citizen science observation of clouds. A cloud observation mobile app, currently in development, will help citizen scientists make and report their observations.

For citizen science projects, data validity can be a concern. The project addresses such concerns by using a standardized protocol and making statistical comparisons of reported observations rather than treating each individual report as true.

As the Web has evolved and data storage has become less of an issue, the projects have begun collecting photos along with the observation form. Photos can shed a great deal of light in questionable cases. A new cloud app being developed for the projects will collect six photos.

Since 1994, GLOBE has received more than 2.3 million cloud reports from nearly 15,000 locations around the world. Since 1997, S’COOL has received more than 135,000 observations from around the world, of which more than half could be matched to satellite overpasses. These data have helped scientists understand the spatial and temporal variability of clouds, leading to several publications while also providing a rich resource for citizen scientists to explore. The GLOBE/S’COOL partnership is a vast source of information about clouds, engaging citizens around the world in authentic science. Observers become more aware of the sky above them while learning about the importance of clouds.