Did you know that the amount of water in soils, called “soil moisture,” can influence precipitation rates and even national security? Soil moisture plays an important role not only in agricultural productivity but also in drought and wildfires, floods and landslides, human health (through the expansion of disease) and even national security. Knowing the water content of soils also plays a critical role in understanding the water, energy and carbon cycles.

In 2015, the National Aeronautics and Space Administration launched the Soil Moisture Active Passive (SMAP) satellite mission to collect data on soil moisture around the world. The SMAP mission is collaborating with the Global Learning and Observations to Benefit the Environment (GLOBE) Program to develop sound scientific protocols for citizens to use in collecting local soil moisture data NASA satellite data. Through the SMAP/GLOBE partnership, student volunteers are taking measurements to determine the moisture content of their local soils, then comparing them to NASA satellite data. 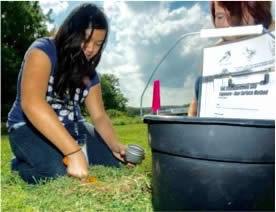 The GLOBE Program is a partnership in science and education that gives students and the public worldwide the opportunity to help researchers understand the global environment and climate. Focusing on K-12 schools, GLOBE connects students, teachers, scientists and other citizens from around the world, helping them conduct real, hands-on science in their communities. Its goal is to foster both science and environmental literacy worldwide.

GLOBE students learn about science through hands-on investigations in their own communities, sparking their curiosity and stimulating their interest in science, technology, engineering and math. GLOBE helps students play an active role in adding to what we know about our global environment and planet.

GLOBE students measure soil moisture at their local sites every day or as often as feasible. The recommended collection time is within a six-hour window (plus or minus three hours) from the time of satellite overpass at about 6 a.m. or 6 p.m., as determined by the SMAP Orbit Calculator Tool. Accordingly, teachers and students collect soil moisture samples between 3 and 9 a.m. or between 3 and 9 p.m. local time.

The final step in the monitoring process is logging onto a secure website and entering the data collected into a master database. Students and SMAP scientists can see the data on the GLOBE website, using them to validate soil moisture measurements by satellite.

For citizen science projects, data validity can be a concern. In response, the project uses a standardized protocol developed with input from SMAP scientists, and it requires repeated observations in the same place over time. Student participants enter the soil moisture data into a secure database. They do not put any personal information into the system.

Both parties benefit from the SMAP/GLOBE partnership. SMAP scientists give the GLOBE Program expert guidance on soil moisture protocols and measurement procedures. They also review the citizen science data and interact with the GLOBE community. Through the partnership, citizen scientists can engage with a NASA mission and learn how satellite information can improve our knowledge of the planet.

SMAP benefits from the ground-truthing measurements collected by GLOBE volunteers, which help support the SMAP calibration and validation program. Additionally, SMAP gets feedback from students on how soil moisture information can benefit local communities. The partnership also builds public awareness of and appreciation for the SMAP mission and for SMAP‘s high-quality data products.